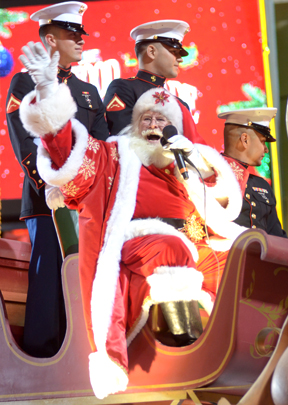 Seventeen years ago I was very fortunate to become the Official Santa for the Hollywood Christmas Parade,  It is one of the most viewed Christmas Parades in the world and it supports their official charity, the Marine Corps Toys for Tots Foundation (T4T), which originated in Hollywood in 1946. I have enjoyed working with the T4T foundation’s leadership, and it was very easy for me offer them my support, whenever and wherever they needed me, giving some of my time, and helping them connect with other Santas and Mrs. Claus across America.

FOR SANTAS AND MRS. CLAUS WISHING TO VOLUNTEER FOR THEIR LOCAL TOYS FOR TOTS CAMPAIGN, CLICK HERE

MY STORY
After a few years of volunteer work, the T4T annual report featured a few photos of me working with the Marines, and calling me the “National Santa,” for Toys for Tots.

I donate my time, services and resources to this highly recognized program.  This includes: photo sessions and public appearances for T4T marketing; special toy distributions in areas of national disasters;  attendance at T4T’s Annual Coordinator’s Conference; and any other tasks they ask me to do.

Additionally with a network of over 4,500 Santas and Mrs. Claus across America, I try to link them to any of the over 800+ regional campaigns in the U.S., the Virgin Islands, and Puerto Rico.    For more details on Toys for Tots, or to make a donation, please visit their web site: www.ToysforTots.org

T4T was started by Marine Reserve Major, Bill Hendricks, when he enlisted the aid of his fellow Marine Reservists in Los Angeles and collected over 5,000 toys during a campaign before Christmas 1947.   The following year the United States Marine Corps expanded the program nationwide with all Reserve Units.  Since Major Hendricks regular work was directing Public Relations at Warner Brothers, in Hollywood, he was able to recruit studios and celebrities to help promote the campaign.

He even enlisted Walt Disney who personally came up with and designed the Toys for Tots logo, which is still used today.

In addition to coordinating Santas for local and regional campaigns, I also volunteer my time at major events with the Toys for Tots Foundation.  If they call, I go wherever they ask.  In this capacity I have gone on special airlifts that delivered tens of thousands of toys for children who were affected in disaster hit areas, including Hurricanes Sandy and Matthews, distribution events, attending the annual coordinator’s conference and  volunteering with any type of publicity or public relations activity. 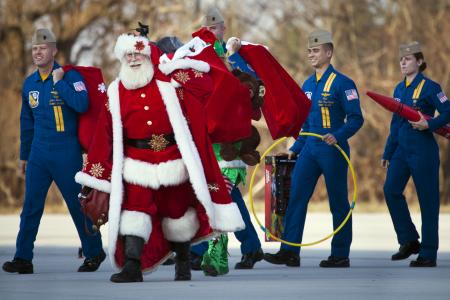