In case you were wondering who the world’s busiest and most active Santa is, look no further than Santa Tim Connaghan!

Celebrating his 50th year of wearing the Red Suit, Santa Tim was hand-picked by Hollywood’s Original Honorary Mayor, Johnny Grant, to be the official Santa for the Hollywood Christmas Parade, with this being his fifteenth year. 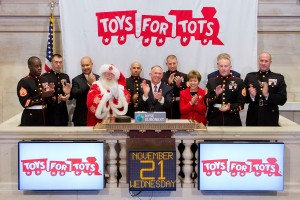 Additionally, he volunteers year-round for the United States Marine Corps Reserve as their “National Santa“  for ”Toys for Tots.”

As an Entrepreneur & entertainer he has established himself in the Santa world, through his personal contributions, & as President of, The Kringle Group, LLC, which includes a variety of businesses.

Through his School4Santas, officially known as the International University of Santa Claus, (IUSC), he awarded diplomas to over 3.300 Santas & Mrs. Claus.  The school is recognized as the largest annual Professional Santa School in the world & is based on his book: “Behind the Red Suit – The Business of Santa Claus.”  Alumni of the School are recognized as members of the “Red Suit Society.”

In recent years the school has been presented on select Princess Cruises in the Caribbean, Alaska, Hawaii & Europe, & featured on various television shows including The Travel Channel which featured the School on Princess Cruise as part of a Holiday special.

A “24/7/365” Santa, he also directs RealSantas.com, one of the world’s busiest Holiday suppliers of Santas for malls, photo studios & special events all over the world, & supplying ‘real beard’ Santas for as many as 1,400 events & promotions each year.

Santa Tim, like all other Santas, donates some of his time to various charities.  In addition to his volunteer visits to various Children’s Hospitals & Ronald McDonald House, one of his proudest accomplishments has been the establishment of a special web site he hosts: www.SantaCares.US   The web site, using his personal data base of over 2,500 Santas, is designed to assist non-profit schools, organizations & most importantly, Military Units & Hospitals in finding Santas for holiday visits.

He also coordinates Santas for the U.S. Marine Corps Reserve “Toys for Tots” community campaigns, and the Spirit of Liberty Foundation that supports programs aiding our military personnel and veterans, and presents America’s Santa.

Many honors have been presented to Santa Tim, but the most prestigious is his induction into the International Santa Claus Hall of Fame at Santa Claus, Indiana in December of 2011.

He is currently one of only 30 men who have received this award from the Santa Claus Oath Foundation.

Past inductees include Edmund Gwenn from Miracle on 34th Street, Mickey Rooney & Haddon Sundbloom who created the famous image of the Coca-Cola Santa.

Santa Tim is an accomplished performer, comedian, public speaker, producer & consultant, & author of “Get a Head Start on Christmas, “a guide to Holiday Organizing & having a “Stress-Free Christmas,” with advice & handy hints on how to enjoy & get the most out to the holiday season.   He has also written many newspaper and magazine articles on preparing for the holidays.

As an RBS (Real Bearded Santa), & one who is very knowledgeable on the origins, evolution & history, from Saint Nicholas to Santa Claus, he is often called on as an expert or authority regarding Christmas facts & lore.

In the role of ‘Kris Kringle,’ he speaks on “The Origins of Santa Claus,” “The Symbols of Christmas, “Fifteen things you did not know about a Mall Santa,” & “How to get a Head Start on Christmas.”

His voice ranges from the baritone styles of Gary Owens & Don Pardo to the comic diversity of characters including Bullwinkle, Barney, Goofy & Mickey, studying with famed character voice artist June Foray. He is comfortable in front of any audience whether it is four, forty, or forty thousand

As Comedian, “Kris K”, he has appeared at the Improv, Ice House, Comedy Store & other locations across the U.S.

In July of 2016 he will direct “Discover Santa 2016,” a tenth anniversary convention with projections to have over 1,000 Santas in attendance.

He has also been featured in many documentary & news shows for the History Channel, National Geographic, Travel Channel & the USA Network.

His interviews have been featured in Time, the Wall Street Journal, Reader’s Digest, Los Angeles Times, & via hundreds of stories in many local, regional, national & international media.

A major figure at spectacular tree lightings, major events, & celebrity parties, millions of children & their families have been delighted with appearances from Santa Tim.

A native Californian & the oldest of eleven children, Tim’s first experience as Santa occurred on December 23, 1969.  Wearing a beard of Barbasol shaving cream he handed out holiday packages to his fellow soldiers serving in Viet Nam.

He served in the U.S. Army’s 9th Infantry Division & is a recipient of the Bronze Star & other awards. In February, 2008 he was awarded the Military Legion of Honor’s Humanitarian Award.

It was while in Viet Nam that he first served as Santa.

Upon his return home, he attended Long Beach City College & California State University at Long Beach where he majored in Communications.   In addition he holds a certificate in Corporate Communications & one in Fundraising from USC (University of Southern California).

It was in just before Christmas in 1970, & while still in college, that he donned his first Red Suit, working at a Southern California Bullock’s Department Store, which later became part of Macys.  It was just a years after his Santa role in Viet Nam!

He spent three years as Santa for Bullocks & expanded his work as Santa, volunteering for a variety of community projects with the Jaycees.

While in radio, he found his talent for project development & fund raising, which began a 25-year career raising millions of dollars working for the Muscular Dystrophy Association, the March of Dimes, the City of Hope, & The American Cancer Society.

As a volunteer, he continued his community work with the Jaycees & in the late 70’s he was elected President of the Lakewood Chapter.  He then moved on to various state chairmanships & was eventually elected California State Vice President for Community Programs in the 1985.

Tim Connaghan has performed, entertained & produced special events throughout California for over 30 years, including community theatre, performing magic, producing shows at the Hollywood Bowl & Universal Amphitheater, & announcing at the Coliseum.

His strong & patriotic support of voting programs & efforts to bring hostages home from Iran, garnered him an international award for community services from the Junior Chamber International.

And during all of those years, he continued wearing the red suit every Christmas for family, fellow employees, friends & special groups.

He says his many years in a variety of jobs & positions were God’s way of preparing him for the greatest job of all …..becoming Santa Claus!

In 1995, after watching a television program where a ‘real’ bearded Santas was featured, his wife suggested that being Santa might be a good retirement.

So he threw his razor away & within a few years was worked a variety of parties & events each Christmas.

He learned of a local Santa association & in 1998 he attended a luncheon with the Amalgamated Order of Real Bearded Santas.

As his Santa work evolved, In 2003, he assumed the role of Executive Director of the 250 member, “Amalgamated Order of Real Bearded Santas” (AORBS).

By January of 2007 the organization had grown to over 1,300 members he had produced the “Discover Santa” Convention & he was elected the associations first President.

The leadership of AORBS, the Convention & portions of his life story, are the basis of a new Scott Rudin/Mike White movie “Santa Wars,” scheduled to begin production in 2014 at Paramount.

In his over 45 years his wardrobe has grown to include many red suits, & he continues his dedication to the traditions of Saint Nicholas & the goal of keeping the realism of Santa Claus alive.

When he has a few moments of free time, he is working on two other books, “Memories of Santa,” a collection of Santa experiences from our favorite celebrities & heroes, & “Santa Remembers,” an auto-biography with stories & experiences from his over 45 years as a Santa.

When not traveling, making public appearances & teaching, he splits his time between California & New York, where he lives with his wife Barbara.  He has one daughter, Morgan, a financial analyst who works in New York City.

He can be reached for consultations, appearances & presentations on his Sleigh Phone at: (631) 871-4901 or: Santa@NationalSanta.com